“American citizenship is a high estate. He who holds it is the peer of kings. It has been secured only by untold toil and effort. It will be maintained by no other method. It demands the best that men and women have to give. But it likewise awards to its partakers the best that there is on earth. To attempt to turn it into a thing of ease and inaction would be only to debase it. To cease to struggle and toil and sacrifice for it is not only to cease to be worthy of it but is to start a retreat toward barbarism. No matter what others may say, no matter what others may do, this is the stand that those must maintain who are worthy to be called Americans.”

During the Coolidge presidency, there were nine individuals whose actions merited the Medal of Honor, the highest recognition to those who distinguish themselves while wearing the uniform. Their actions were not all combat-related, as the years between 1923 and 1929 was a time of peace. Their courage and selfless service, however, be it in behalf of their brothers-in-arms, those around the world in need, or in the cause of greater possibilities (with nothing but uncertain flying crafts and their navigational skills) were testaments to what President Coolidge referred — those “worthy to be called Americans.” That tradition of selfless service will continue unbroken and it remains, rightly so, a reason to honor and aspire to those worthy of the name “American” to this day. 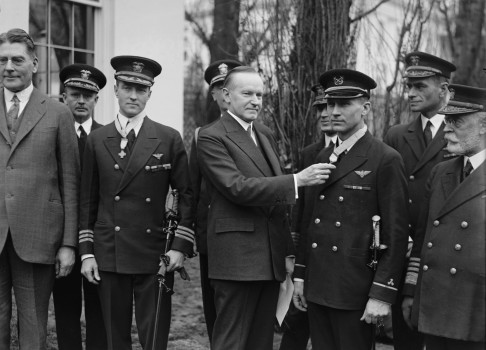 President Coolidge awarding the Medal of Honor to Machinist Floyd Bennett, USN (in front of him) and Commander Richard E. Byrd, Jr., USN (behind Coolidge), for their courageous risk of life in the first “heavier than air flight” to and from the North Pole in a tri-motor Fokker F-VII called the Josephine Ford.

The awarding of the Medal of Honor to Torpedoman Second Class Henry Breault, USN, for his quick actions to rescue a shipmate in their submarine 0-5, which sank within one minute. Confined by the hatch that closed after him, he kept himself and his mate alive for thirty-one hours below the surface until rescued.

Chief Gunner’s Mate Thomas Eadie, USN, received the Medal of Honor for an extraordinary rescue of his shipmate, Chief Torpedoman Michels, whose line fouled 102 feet below while trying to connect an airline to the sub USS S-4. CGM Eadie (as his citation states) “knowingly took his life in his hands,” diving down to skillfully extract Michels, bringing them both back to the surface after two hours of heroic effort.

Lieutenant Commander Walter Atlee Edwards, USN, was awarded the Medal of Honor for his rescue of 482 men, women and children from the sinking French transport Vinh-Long, while aflame in the Sea of Marmora, off the coast of Turkey. While commanding the USS Bainbridge, he placed and kept his ship alongside the burning wreck until all alive were safely transferred to the American vessel. 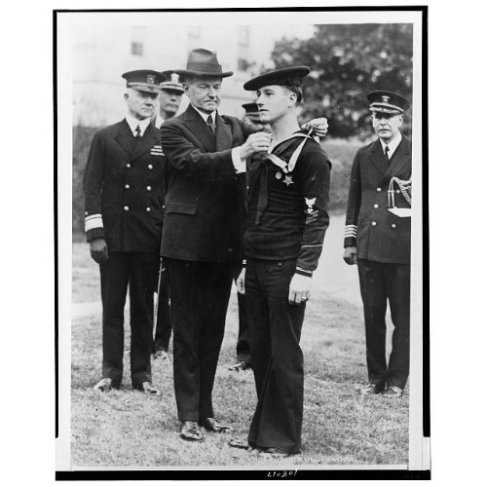 Machinist’s Mate William Russell Huber, USN, was recognized here with the Medal of Honor for his exceptional heroism after a boiler exploded aboard the USS Bruce in Norfolk Navy Yard, 11 June 1928, he went into the “steam-filled fireroom and at grave risk to his life” successfully carried shipmate, Charles H. Bryan, to safety. Machinist’s Mate Huber went below again to aid in removing others from the room despite suffering severe burns to his arms and neck.

Captain Charles A. Lindbergh, Army Air Corps Reserve, was recognized with the Medal of Honor for both courage and skill despite the risk in navigating by nonstop flight from New York City to Paris, France, in the Spirit of St. Louis, a custom-built single-engine monoplane, achieving (as his citation, held here by President Coolidge, states) “not only…the greatest individual triumph of any American citizen but demonstrated that travel across the ocean by aircraft was possible.”

Ensign Thomas John Ryan, USN, was presented with the Medal of Honor for heroism in rescue of a woman trapped when fire broke out at the Grand Hotel in Yokohama, Japan, September 1, 1923, as the result of an earthquake that hit the city. Ensign Ryan disregarded his own safety to help another, as unexpected events demanded decisive action.

Here is First Lieutenant Christian Frank Schilt, USMC, to whom the President has just given the Medal of Honor for his superb actions in Quilali, Nicaragua, over the course of three grueling days in January 1928. First Lieutenant Schilt, following an intense fight to restore peace to the area, volunteered to evacuate all of the wounded by air and bring in a new commanding officer as relief. Taking off a total of ten times while under steady enemy fire from rough urban terrain, he removed all the wounded, saved three lives and brought back the necessary supplies to those in dire need on the ground.

President Coolidge and his Secretary of War, Dwight Davis, were left in a difficult position in the fall of 1925. It been a difficult year for both men, from the retirement of Secretary Weeks, numerous battles with Congress and now the looming court-martial of Colonel William Mitchell. To say that the Army Air Corps officer was “outspoken” would be an understatement. In pointing out the lack of preparedness the country had for air defenses, he demonstrated a self-serving and theatrical manner that did not promote the good order and discipline most expected of commissioned officers in the military. Secretary Davis, having been a world-class tennis player (the namesake for the cup he had designed), appealed to those under his leadership on the basis of teamwork. The military, not unlike a team of athletes, has to collaborate in order to accomplish their goals. Selfish interests, however valid their grievances, must be governed with humility and self-control for the sake of others and the achievement of the mission. This fit perfectly well with President Coolidge’s ideal of service. The concepts were reflections of each other.

Yet Mitchell would continue to demand attention not for the substance of his observations but for the public to embarrass his superiors into action. Such was not in harmony with a humble attitude of teamwork and service of others. Colonel Mitchell would consequently face court-martial, five years suspension of service and loss of pay and other allowances. President Coolidge, not unsympathetic to the man’s case, would affirm Secretary Davis’ restoration of Mitchell’s allowances and half of his base pay, as Nancy Kriplen notes in her book on Mr. Davis. But this public reprimand of Mitchell would stand. The Colonel, Mitchell (as Davis had also risen to the rank of Colonel before his retirement), would turn in his resignation early the next year. Secretary Davis would accept it. Yet, neither the President nor his Secretary were averse to the preparedness of the country — such an accusation is hardly fair or accurate — nor were they stuck in old modes of thinking that refused to acknowledge air power. In fact, the spring of 1926 they would push forward the development of 52 tactical squadrons and the beginnings of an independent Air Corps signed into law by President Coolidge. The Distinguished Flying Cross would be awarded for the first time by Coolidge himself not only to the illustrious Lindbergh but also to the crew of the Pan American flight that tallied 22,000 miles in the air over a month before the better known “Spirit of St. Louis” crossing. Secretary Davis would award the Cross to Orville Wright and his brother, Wilbur (posthumously) in February 1929. It was the Coolidge administration that actively promoted the advancement of the country into modern aviation. Speaking years later of the transcontinental crossing of Costes and Bellonte from Paris to New York, the former President would reemphasize the familiar theme of service and collaboration, “Such flights are of great value in their effect on international comity. When Lindbergh made his historic voyage to Paris, the French people felt almost as much pride in his accomplishment as his own countrymen. It aroused and cemented a most wholesome sentiment of friendship…It hastens the day of good will and co-operation,” September 3, 1930. 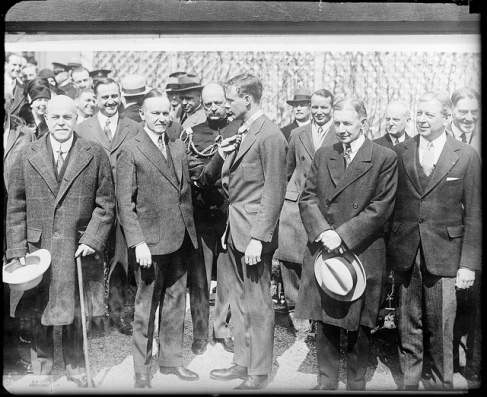