Dedication of the San Martin Statue accepted by President Coolidge on behalf of the American people, October 28, 1925. Courtesy of the Library of Congress.

While this country and the nations to our south, no doubt influenced by the example of our national leaders, are locked in a race to radicalize, rushing headlong into the morass of centralized government command and control, liberty was expanding in the opposite direction during the Coolidge Era of the 1920s. It was statism that was in retreat in those days. The encouragement of economic growth, trade expansion, fiscal accountability and representative government was experiencing a renaissance from the days since the fight for independence a hundred years before. Certainly, there were clouds on the horizon and nothing utopian about the decade or the development of Latin America’s republican experiments in self-government. This does not remove the fact that America’s partnership with her sister republics to the south was anything but an absorbing focus to Coolidge. In fact, Coolidge was a firm proponent of the Monroe Doctrine, taking every opportunity to keep the Old World norms of results by coercion out of the New World’s ideals of peaceful resolution and institutional liberty. Adopting a revolutionary set of policies would overturn that heritage which we shared with our fellow sojourners in republican institutions.

It is no surprise then, when the people of Argentina presented the people of the United States with a statue of the great statesman and soldier, San Martin, that Coolidge gladly accepted so honorable a gift. The President did more than that, however. Coolidge took the occasion to teach, to examine the meaning of and significance behind the system of constitutional freedom begun in the thirteen Colonies and imitated by her neighbors, including the patriots of the Argentine. San Martin symbolized this instructive truth and Coolidge would not let the moment pass without reminding his audience of the historic blessings and great achievements republican institutions have given the people of the New World. Today is no less an occasion to reflect upon and be thankful for what so many have worked to attain in order that we who love liberty continue to enjoy its fruits. As Coolidge recalled on a different occasion, we can only participate in those effects if we maintain and cultivate the spiritual causes which make them possible.

Ambassador Pueyrredon introduces President Coolidge with remarks commending the relationship between our republic and the Republic of Argentina. Coolidge honors the Ambassador in his speech, noting that Pueyrredon, too modest to say so, was an actual descendant of the great patriot San Martin. Courtesy of the Library of Congress.

President Coolidge dedicating the statue of San Martin. Courtesy of the Library of Congress.

He said, “To the people of the United States it has been a matter of pride and gratification that their ancestors were providentially chosen to initiate the movement for independence in the New World...It was not possible that these sturdy communities should merely contribute to the world a distorted reflection from the light of older states and ancient institutions. The discovery of America to the world was providentially fixed in a time of spiritual and intellectual awakening. It was an epoch of new lights and new aspirations, of mighty clashes between the traditions of the old and the spirit of the new time. The New World proved a fruitful field for testing out the new ideas of man’s relations both to his Creator and to his fellow men, In the warming sunshine of such an opportunity, in the fertility of such a virgin soil, these experiments found that full and fair scope which made possible their triumphant conclusion.

“It may be well to consider for a moment the essential similarities which marked the experiences of all the new American communities during their struggles for independence and later during their trying era of institution building. By doing this we can better realize that the American contribution could not have been made save from the soil of a new country. You can not transplant an ancient and rigid social system to a new country without many and revolutionary modifications. You can not expect that these new institutions will have adequate opportunity for development unless they grow in the light of human independence and spiritual liberty. 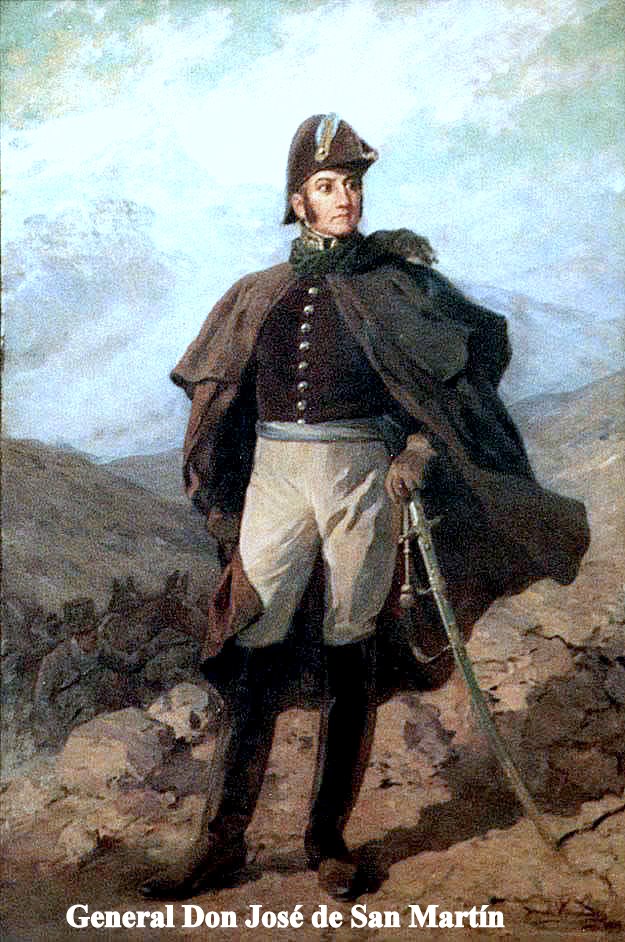 San Martin, in the countryside of Argentina. Absent from Coolidge’s list but no less deserving for his principled stand on a constitutional, term-limited executive is Francisco de Paula Santander, who went into exile for his opposition — even when it meant differing with the great Bolivar.

“This realization came early to the great leaders of thought in all the American countries. So we find that as North American aspirations produced our Washington, Jefferson, Adams, Hamilton, and Franklin–so the countries to the south of us brought forth their Miranda, their Bolivar, their Hidalgo, their Artigas, their O’Higgins, their Sucré, their Morazan, and finally their San Martin – patriot, statesman, immortal contributor to the founding of three Republics. It is to honor the memory of San Martin, and to acclaim his achievements, that we are gathered to-day.It was the fortune of our thirteen North American Colonies to be first in attaining the fact and recognition of independence. Deeply appreciating their own high fortune, the people of the new United States were from the beginning profoundly sympathetic with every movement for liberty and independence throughout these continents...

“The present is a time when men and nations are all giving heed to the voice which pleads for peace. Everywhere they are yearning as never before for a leadership that will direct them into the inviting paths of progress, prosperity, and genuine fellowship. A clearer vision has shown them not alone the horrors but the terrible futility of war. In such a time as this they will do well to turn their thoughts in all sincerity to these lessons from the statesmanship, the experience, and the constant aspiration of the South American nations. The continent which of all the world has known less of war and more of peace than any other through this trying period is well entitled to pride in the service it has rendered to its own people and in the example which it has set before the rest of mankind. 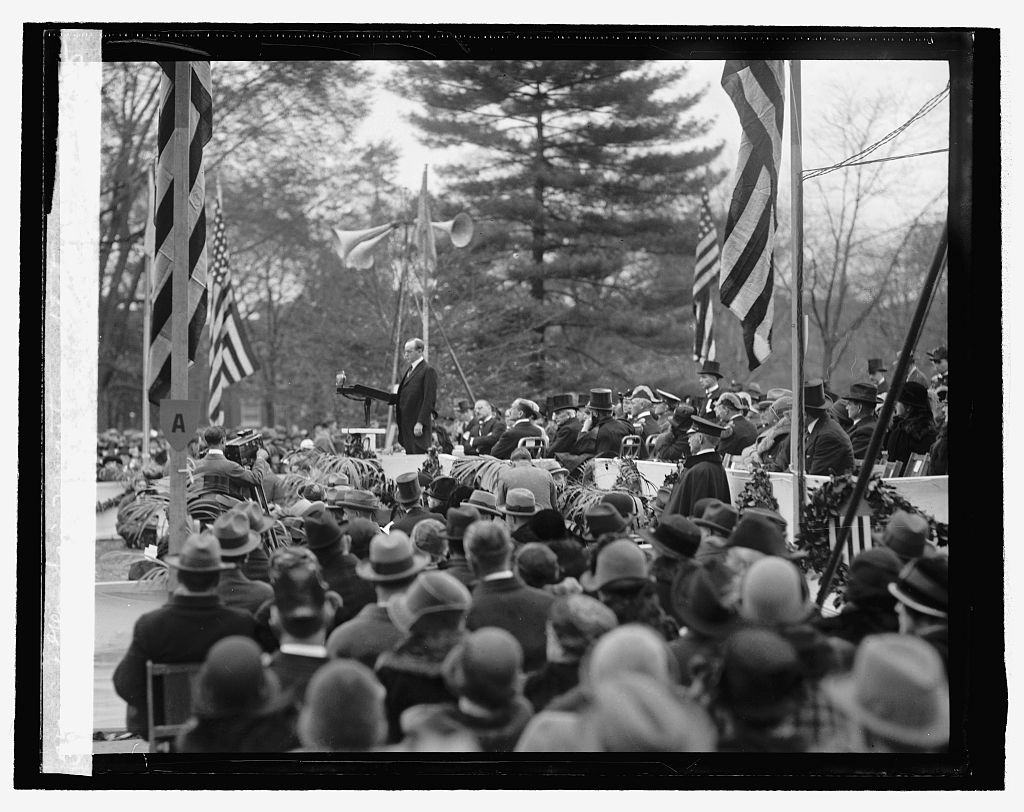 Courtesy of the Library of Congress.

“So the present occasion has appealed to me not merely as appropriate for the exchange of the ordinary felicitations but as one on which these contributions of Latin America in moral and intellectual leadership might be given something of the recognition they have deserved. It is not possible to do more than suggest the subject. But even so fragmentary an allusion to such an inviting field, I hope may serve a useful purpose. It would be worth the effort of men and women who seek means of preventing wars and reducing armaments to study the experiences of the American Republics. I commend them to the close attention of all who would like to see peace as nearly as possible assured and war as far as possible outlawed from the earth.

“Among the leaders whose courage and genius brought realization of the New World’s dream of liberty with independence, none was moved by a deeper horror of war than San Martin. None among his colleagues would give more ardent approval than he to the work of later statesmen who had a vision of a continent dedicated to peace and the true welfare of its people. To his sagacity, more than that of any other man, is due the distribution of the South American Continent within its present national lines because he possessed the foresight of the statesman along with the qualities of the brilliant soldier and the eager patriot.

“As has happened too often to the foremost benefactors of their fellow men, San Martin was denied during his own life those testimonies of gratitude and reverence which other times and all peoples have been proud to shower upon his memory. I have been told that monuments to him have been dedicated in almost all the capitals of South America. To-day the country which gave him to the cause of freedom is presenting to the Government of my own Nation this statue of him. It is a welcome duty which comes to me, in behalf of the Government and people of the United States, to express their pleasure in accepting it. May it stand through the centuries as an inspiration to all who love liberty. May it ever be an added reminder of the fellowship between the great nation which gives and that which is honored to receive it. May it serve to keep in the minds and hearts of all humankind the realization of the noble and honored place which is held by that republican system of the New World, of which he was one of the foremost creators.”

Courtesy of the Library of Congress.