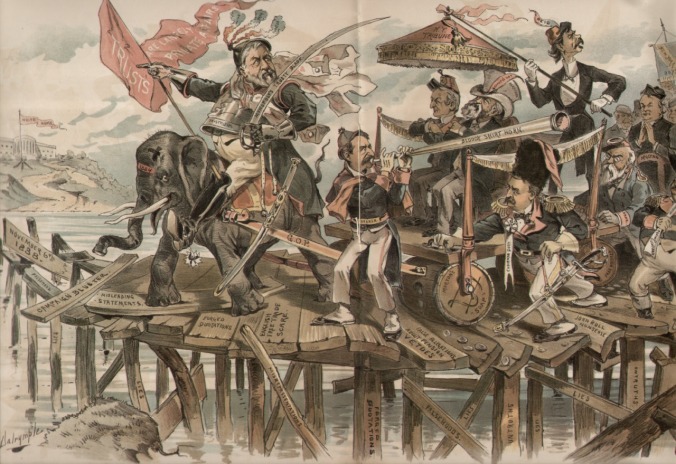 One of several “Puck” cartoons depicting the “waving of the bloody shirt,” shown here as a cape around James G. Blaine’s neck (as he sits atop the wounded GOP elephant) an appeal to the sacrifice of martyrs, heroes, and patriots for the country as a distraction from a policy question or an otherwise weak political campaign. The metaphor in American politics originated out of the 1868 Republican campaign as a device to generate sympathy for GOP positions by further politicizing the sacrifice and service of Union (hear Republican) veterans in the long and bloody war won against those who stood accused of betraying and splitting the Union, the Democrat South. This is from 1884 but, unfortunately, there is no Grover Cleveland running this time.

The fact that this election year has been – and will be, as it is not over yet – one of the most unconventional in history is now a supreme understatement. Fear of what may happen on all levels is palpable. People process that fear in different ways. Some welcome it, wrapping themselves in the flag of their choice or waving the current equivalent of the symbolic “bloody shirt” to underscore the victimhood of “us” versus “them.” The tactic is only employed all the fiercer when anyone questions what rhetoric or behavior might be doing to further encourage a predisposition to violent revolution. Going into the gutter with the worst has not been tried to this extent before and likely for the reason that it only begets an even worse reaction. Perhaps taking a page from the Coolidge example is in order. Rather than fighting fire with fire, he understood dampening the situation with some refreshing cold water works far better. Yet, suggesting the level of response might be connected to the level of irresponsibility in a candidate is close to political blasphemy in our unhinged environment.

Having spent years running away from even the hint of the remotest offense on any of its long-standing platform principles, the Grand Old Party is largely embracing the very stereotype it supposedly dreads. It has become its own worst parody. Others brace for what is coming with clumsy obfuscation, feeding the appearance of internal trouble or at best leaking whispers of collusion for survival. Still others, are just plain exasperated at the rapid descent into cultural and political insanity that seems to have accelerated this year. All should be concerned that truth – whether we have the fortitude to face it or not – is the first and most important victim of this year’s storm.

None of this bodes well for what is ahead. The torrent that has been courted, enabled, and opposed is no less forceful than what hovered darkly before the 1860 convention. It is no more a creature to be welcomed for its galvanizing effect of nationalistic fervor than it is for those led to believe socialism (if finally dressed up and packaged attractively enough) will finally sweep away all that is unjust or unequal about society. It summons all of us to a higher citizenship, a more serious-minded preparation for the future, especially those conditions that we will bequeath to our children. 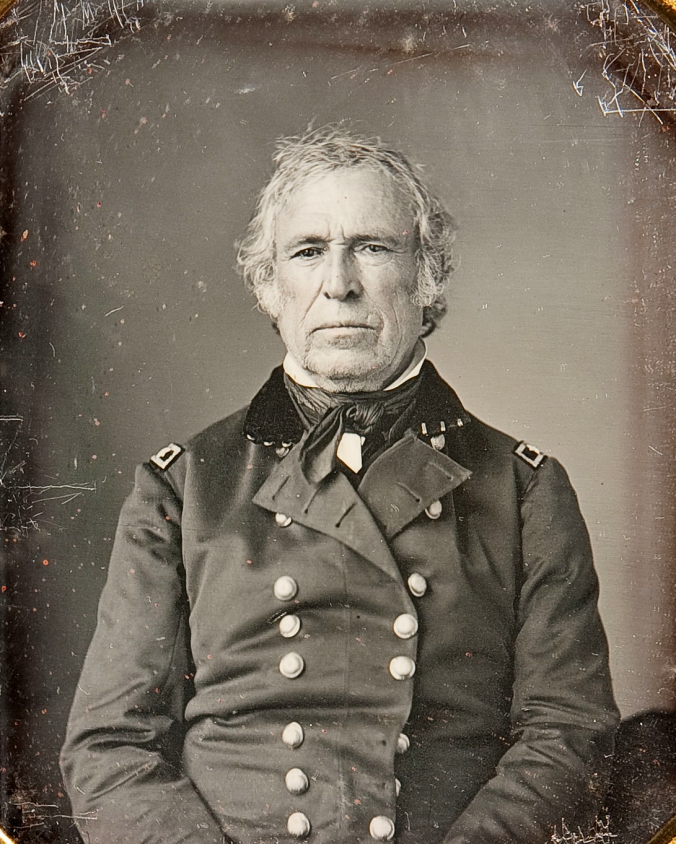 Zachary Taylor, the divided and reluctant Whigs’ choice in 1848. The Whigs were the political forbear of the Republican Party. Both Daniel Webster and Henry Clay declared this convention was the death of their party. It proved to be so within 8 years.

Nevertheless, the experiences of the past remind us that some circumstances have been encountered before, some roads have been traveled. The 1848 convention and the nomination of quintessential outsider Zachary Taylor affords plenty of instruction. The 1976 convention offers some enlightening guidance on contested conventions when Ford’s team (in the effort to block Reagan’s nomination) instituted the “Justice Resolution” that, for the first time, abandoned the GOP’s historic protection of individual conscience for the Democrat institution of unit rule voting. The unit rule being when a majority of a state delegation favors a particular candidate, the minority is overruled and all must vote according to that majority decision. Of course, the Reagan team did away with that in the 1980 convention rules but it has been creeping back in through state party requirements, state laws, and delegate approval ever since.

A snapshot from the 1920 Republican National Convention held in Chicago.

The 1920 convention is also informative. After ten ballots of Presidential nominations the nomination finally landed on Senator Warren Harding, who had been previously cleared by the party leadership. The delegates had enough of feeling led to prearranged outcomes. The Presidential nomination having been sewn up, the convention chairman, Henry Cabot Lodge of Massachusetts, turned the gavel over to his temporary replacement and left confident that the process to anoint a Vice Presidential nominee would be even smoother. One delegate, an Oregon judge named Wallace McCamant, stood to be recognized.  The temporary chairman (likewise assured he was about to receive the nomination of Wisconsin’s U.S. Senator Irvine Lenroot, the Establishment’s choice) gave Judge McCamant the floor.

Before McCamant had finished speaking, having naming instead Governor Calvin Coolidge, delegation after delegation began to cheer and second the move. Stampeding for their choice, a man many had preferred for the top of the ticket, 674 1/2 (back when delegates could split their votes) went resoundingly for Cal Coolidge. He had demonstrated to the nation presidential strength as Governor when he resisted the pressures to rehire the Boston police officers who walked off their jobs and left the city prostrate to lawlessness the previous fall. Before the next convention (which occurred in Cleveland, by the way) in the summer of 1924, he would already be President of the United States.

Oregon judge and Republican delegate, Wallace McCamant. Coolidge was forever humbled by this unsolicited effort that led to his nomination and eventually made possible his rise to the White House. Thankful, Coolidge would appoint him five years later to the Ninth Circuit Court of Appeals during a recess of the Senate but the old grudges held by Senators of what happened in that 1920 convention would have none of that and shot down any attempts to confirm McCamant. The judge served out the rest of his appointed term and went back to a quiet life in Oregon until his death in 1944.

Called with the news, Calvin answered the phone at his temporary room at the Adams House in Boston upon returning from his daily walk. Hanging up the phone, he turned to Grace (his wife) and said, “I have been nominated for Vice President.” Incredulous at first, being very familiar with his frequent teasing, she playfully replied, “You are not going to accept it, are you?” “I suppose I shall have to,” he responded. And he did. But history was made by a brave delegate stepping forward when he could have just resigned himself to the way things seemed to be as the way things are.

The selfless Frank Waterman Stearns, Coolidge’s greatest champion at the 1920 convention. Here he sits in a rocker at his home in Swampscott, Massachusetts.

There was a bit more to this story. It was Frank W. Stearns, the virtually one-man Coolidge campaign team, who without a single instruction believed in Cal so much that he printed a collection of Coolidge’s speeches and engraved them with the names of each delegate to be present at the Convention. Stearns also sent out a volume (and in McCamant’s case, two) of “Have Faith in Massachusetts” (published the previous year), mailing them to various Republican leaders and delegates around the country. The smaller volume distributed at the Convention was perfectly marketed, fit nicely in a pocket and was intended for ready-reading in those Convention lulls when nothing seemed to be moving. Stearns succeeded beyond even his aspirations. 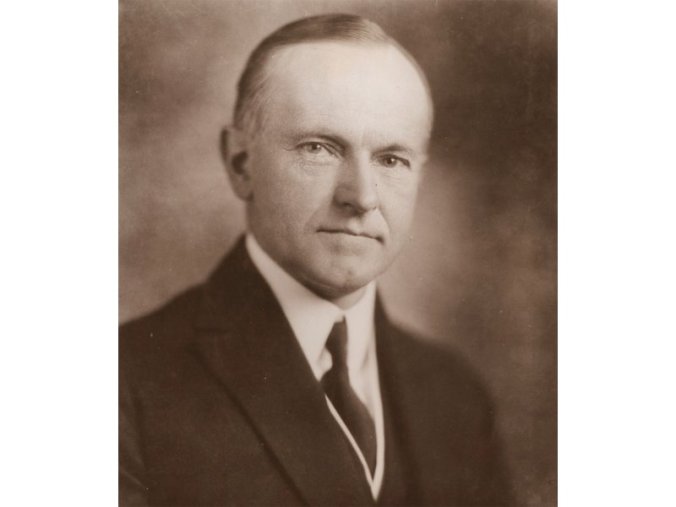 “Silent Cal” Coolidge, who said more in fewer words than it takes just about anyone nowadays to get out and even then what is said never approaches Cal’s substance or clarity.

This set the stage for the 1924 Convention – known as the most orderly and (to some) boring – gathering in years. Coolidge’s experience equipped him especially for diffusing potential political powder kegs with perspective and discretion. He was a kind of HAZMAT leader in politics, talented at keeping the focus on the principles of the GOP while downplaying and sometimes, outsmarting the personality politics that so often misled and divided, fractured and destroyed. When others tried to bait him, he saw through those attempts and thwarted them. He remains one of the most discerning judges of human nature and one of the most disciplined defenders of sound, constitutional government America ever had as President. His wisdom continues to serve and guide for those who prepare for the future with the insight of the past.

It is never more timely then, to equip ourselves with some of the most practical principles and sensible insights from a man who rose to the very pinnacle of power in our system and yet, retained his soul, kept his oath, resolved never to lose sight of essential truths, and held his party accountable to the promises they had made to the people and the duty they owed to the country as a whole.

We need what Calvin Coolidge has to say now more than ever. Equip yourself by starting with this book, Keeping Cool on the Campaign Trail, available on Amazon or listen on the go with Audible and iTunes. 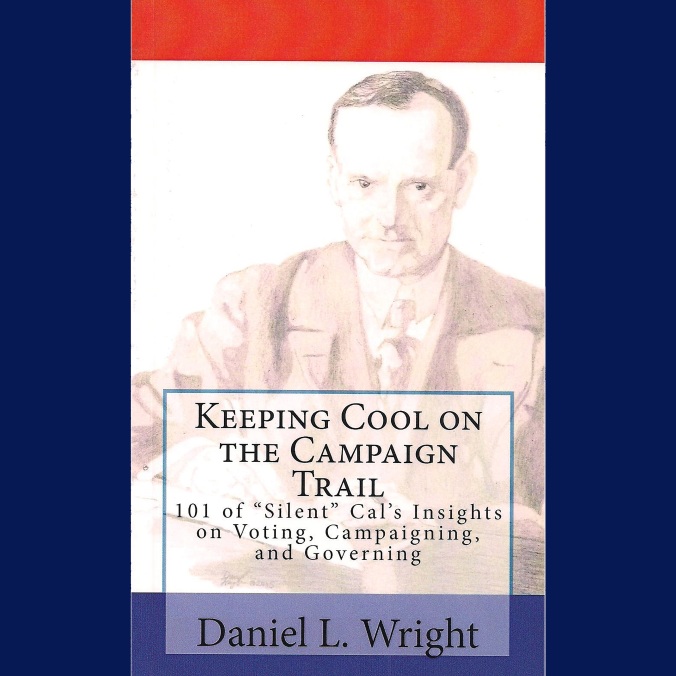