Edna M. Colman recounts an instance that took place just before President Coolidge’s inauguration ceremony in March of 1925, when much discussion ensued among the staff regarding Presidential handshaking. Colman writes, “The fact that, although in the White House but about twenty months, President Coolidge had shaken hands with ninety thousand people brought forth argument against the practice on the part of some of his close friends. A committee was appointed to attempt to relieve him of some of his routine duties. When the solicitous group had expounded to him their views upon the matter and expressed their desires and intentions, expecting him to acquiesce with pleasure and possibly with praise for their thoughtfulness of him, he electrified them and disposed of the entire matter in his characteristic fashion–‘But I like it!’ “

So much for the mistaken notion that a cold and unfeeling Coolidge lazily slept through the 1920s! 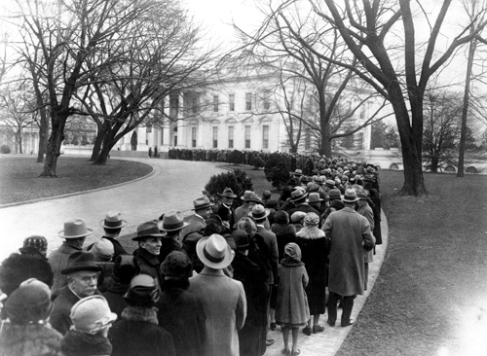 New Year’s Reception by the Coolidges at the White House, 1927