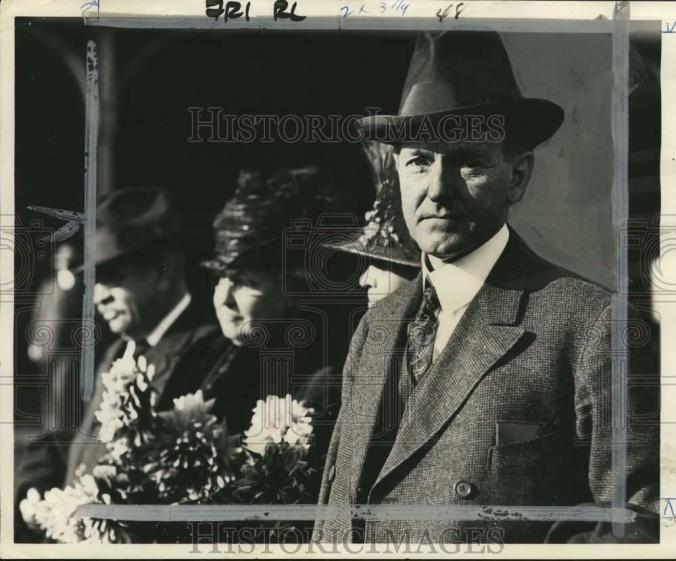 The Coolidges with Mr. & Mrs. Stearns standing beyond. Despite the watermark and formatting lines for news publication, this snapshot from HistoricImages captures it all.

Today marks the birthday of Frank Waterman Stearns. This name and the selfless gentleman who wore it are virtually forgotten today but he remains very much alive for us here. He demonstrates that behind our best leaders are men and women just like Mr. Stearns, those who give everything but ask nothing, those who advocate and campaign for because the candidates they support are worthy of our every effort. He was there early in Mr. Coolidge’s career having realized that this man was genuinely different from the rest, that he really merited all the backing possible, and that he was not just qualified to be a leading name in state government, Congress, or in the Cabinet, but nothing short of the Presidency itself. Some mocked this short, bespectacled man at the time, the owner of a department store for ladies’ garments and some even deride his efforts today, asserting ignorantly that Cal had, at most, two votes at the Convention in 1920, that Judge from Washington state and some other person, whoever that was. It was Mr. Stearns who paid for and distributed – on his own – a modest, pocket-sized book of Coolidge’s speeches and statements sent to each and every delegate chosen for the nominating convention. It enabled the participants to read something worthwhile and which fit easily inside every jacket or purse during those many delays, breaks, and interruptions in the process. It was that little book that helped pave the way, whatever authors claim to the contrary, for the insurgency by delegates to storm the floor and back Coolidge on the 1920 Republican ticket. It has often been said, history turns on these seemingly insignificant events.

Behind every worthwhile and, ultimately, successful campaign is a Mr. Stearns. He never wanted the limelight, never held an important post in government, and certainly never exercised any unseen power “behind the throne” but he achieved his goal because he loved what America represents, knew that Coolidge was fitted for the highest role of leadership, and would serve her well. Through all the frustration, uncertainty, and turmoil of being friends with such an independent, honest, and dutiful President, he was rewarded with honors that no office or title can bestow. Stearns’ example of persistent and selfless citizenship can and should inspires us.

It remained a mystery to many who this Mr. Stearns was and what his “real” angle might be. It defied every cynical assumption that he truly had none. The press, whom he befriended, could not quite figure it out either. Was he an inner, unofficial adviser to the President like Colonel House had been to President Wilson? Was he exerting some invisible force on decisions and policy? Or was he truly just tagging along like everyone else, as much at the mercy of discovering what President Coolidge would decide and do next as the rest of Washington and the country. The latter was much closer the truth. Though no poker player, Cal always did play his cards close to his chest and actually did outplay others in the virtual game continually unfolding in D. C.

The status of Mr. Stearns, often a regular guest at the White House, puzzled many who were used to pinpointing exactly who held this or that sway on any given elected official. They would never quite figure it out and Coolidge, as much as Stearns, remained an enigma they simply could not crack. Cal and Stearns knew it and shared the inside joke on this day in 1928, when Mr. Stearns marked his seventy-second birthday. He received from the President the perfect gift: the recently published set of The Intimate Papers of Colonel House. Just inside, it contained this characteristically laconic inscription in Coolidge’s own hand:

“To Frank W. Stearns, with Best Wishes for His Birthday”