As Senate Democrats continue to back the President’s cherry-picking approach on which public sites to shut down and who deserves funding, veterans simply do not contribute anything to their Party agenda that merits respect or support. In the midst of what is supposed to be a Government “shutdown,” we saw the reinforcement of the World War II Memorial fencing by seven Park Service employees. At the same time, the Normandy American Cemetery and Memorial in France has been chained shut “due to the U.S. Government shutdown.” So, we are spending money to reinforce gates and place guards at closed sites because we no longer have the money to keep them open?

Meanwhile, Camp David, the Presidential retreat, is kept open. The Blue Angels and NASA programs have long been shut down as visible symbols of American achievement and patriotism. Now Senator Harry Reid is refusing every effort to fund the National Guard, salaries for Reserve personnel, veterans’ services, and museums and parks. Taking all of these together, combined with the rabid attacks by Democrats against our military for serving in Iraq and Afghanistan during the previous administration, it forces the question: What do the Democrats have against our Armed Forces? Of course, they do not have value to the agenda.

Calvin Coolidge, upon being officially informed of his nomination as Vice Presidential candidate, spoke at length on what the country needed. He saw America suffering under a militant White House, continuing to prosecute the powers of wartime in peace. When a return to respect for our laws and institutions was needed, President Wilson and his Party kept the hostility and obstruction going. Evading their responsibilities to govern, the Democrats had assumed control at the expense of the people’s sovereignty. Millions were now unemployed, many of them World War I veterans and their families. The economy was stagnating under high taxation rates extracted by the Internal Revenue Service. A culture of fear was being perpetuated by Wilson’s Justice Department. The Democrats were shirking the duty they held not only to all the people but to those who had served. The unrestrained waste of the people’s substance had to be stopped. It was time to change those in charge. What they were doing was wrong and the first opportunity for the people to correct the direction in which America was going came with the 1920 election. As we know the people took their country back decisively, sweeping the White House, the Congress and state governments across the land. 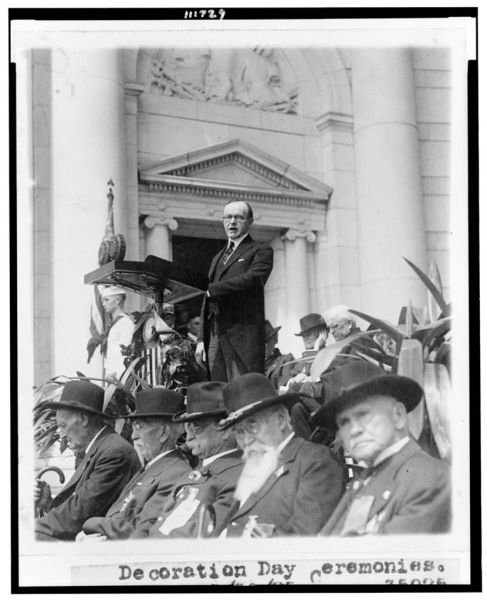 When it came to veterans, while there could be no price quantified for what they had sacrificed, America had an obligation to them they could not pass off to anyone else. Coolidge said,

Whenever in the future this nation undertakes to assess its strength and resources, the largest item will be the roll of those who served her in every patriotic capacity in the world war. There are those who bore the civil tasks of that great undertaking, often at heavy sacrifices, always with the disinterested desire to serve their country. There are those who wore the uniform. The presence of the living, the example of the dead, will ever be a standing guaranty of the stability of our republic. From their rugged virtue springs a never-ending obligation to hold unimpaired the principles established by their victory. Honor is theirs forevermore.

The form this honor should take is what compelled Coolidge to stand on principle against cash payments to veterans, or any other special demographic. He knew what the perception of a Government giving money away does even to good and honest people. He knew that no amount could adequately recompense those who risked all, some giving life itself, for America’s ideals. When he vetoed measures to bestow cash bonuses to veterans, he acted with full awareness of what it might cost him politically. Principle mattered more to him. The principle of honoring sacrifice to Coolidge did not consist of merely appropriating money to show that “we care” but by embracing a deeper, more profound respect and reverence for what our veterans have done. The Congress of his day, overrode his veto.

Americans had made promises to veterans and those promises must be kept. Coolidge continued,

Duty compels that those promises, so freely made, that out of their sacrifices they should have a larger life, be speedily redeemed. Care of dependents, relief from distress, restoration from infirmity, provision for education, honorable preferment in the public service, a helping hand everywhere, are theirs not as a favor but by right. They have conquered the claim to suitable recognition in all things.

This recognition would be desecrated, however, if honoring our veterans became nothing more than a cash giveaway. More is required than simply to throw money at the problem and walk away. Unless we take up the service of those who served, no amount we give purchases the compassion and respect we owe. By helping the veteran who lives next door, providing for the assistance of his family, supporting the education and upward mobility of our defenders, wherever they are, ensuring the wounded are healed, the forsaken encouraged and the war-torn are built up, we are meeting that obligation. Responsible government appropriates the funds but it accomplishes nothing without the active participation of you and me serving those who served.

On numerous memorials across our nation, what Coolidge said next is fittingly preserved for posterity on the stones we have established in recognition of our veterans’ sacrifices. He reminds us still, “The nation which forgets its defenders will be itself forgotten.” 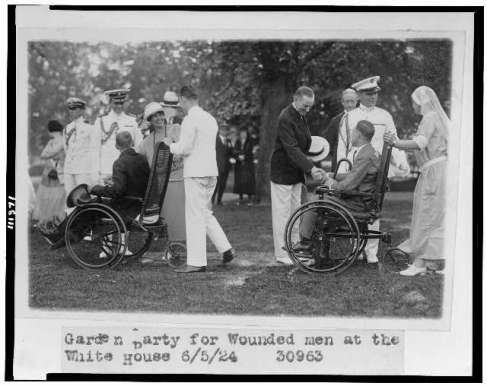