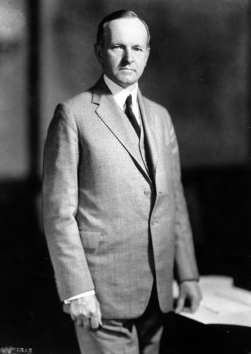 Calvin Coolidge standing in the old Cabinet Room, established by President Taft, on the West Wing of the White House.

“We always have the defeatists with us. Washington had them…Lincoln had them…Wilson had them during the war to such an extent that he found it necessary to turn over the conduct of important legislation to Republican leadership. We have them at the present time doing their best to capitalize distress and preaching the overthrow of our system of economics and government. It is these forces more than depression which render our condition critical.

“If we have the courage and vision to maintain our governmental and social structure we can meet all other problems. The forces of discord always work in an insidious way. They often attempt to conceal the peril of their unsound proposals under the claim that they are liberal. When that is analyzed it usually means that they intend to give away the money which someone else has earned. Such a process, once started, is bound to increase until it lands the country in universal bankruptcy and general disintegration. It is a time when the great body of our people of common sense should not be stampeded, but should stand firm. In spite of all declarations to the contrary, of the professions of platforms and candidates, the record of two generations discloses that the safety of the country lies in the success of the principles of the Republican Party” — former President Calvin Coolidge, September 10, 1932.