Coolidge friends, take notice: scholar David Pietrusza’s next book is coming out in August, “1932: The Rise of Hitler and FDR.” We here remember that Coolidge was not merely the sole Republican candidate to defeat FDR as he rose to national office, he took a reluctant part in the campaign to defeat Roosevelt in 1932, reaffirming foundational principles as the bulwark against a spendthrift, cavalier approach to governance. Speaking to thousands gathered at Madison Square Garden, Cal had both resisted a movement to draft him for President again and an effort to recruit him for a more active role on Hoover’s behalf. He refused both for very principled reasons. As we know from years before, he was no fan of his successor and yet the lesser of two evils required he speak on behalf of Republican principles. It was his last public appearance. Coolidge, confessing to friend Henry Stoddard, already knew he was living in a time to which he no longer belonged. He would be gone by the next year. Yet, while life remained in him, he would exert himself one final time to speak of fundamentals.

Just as Mr. Pietrusza’s “1920” revealed a compelling account of the personalities and lessons of that Presidential election year, “1932” will not disappoint. 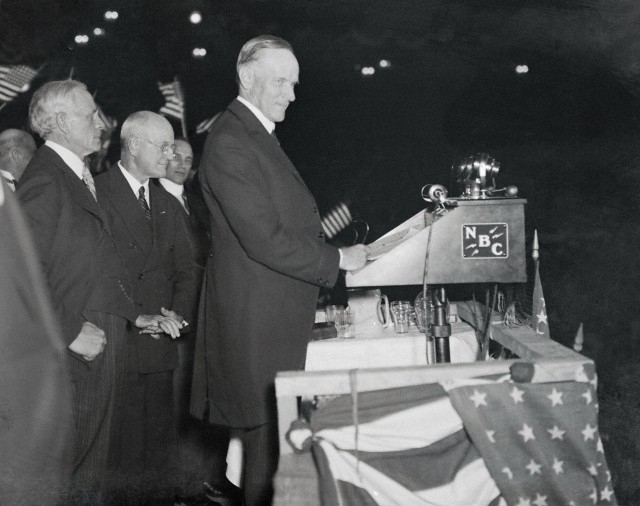 Coolidge addressing the multitude and millions more via radio, on Republican principles at Madison Square Garden in New York, October 11, 1932. Courtesy of Corbis.