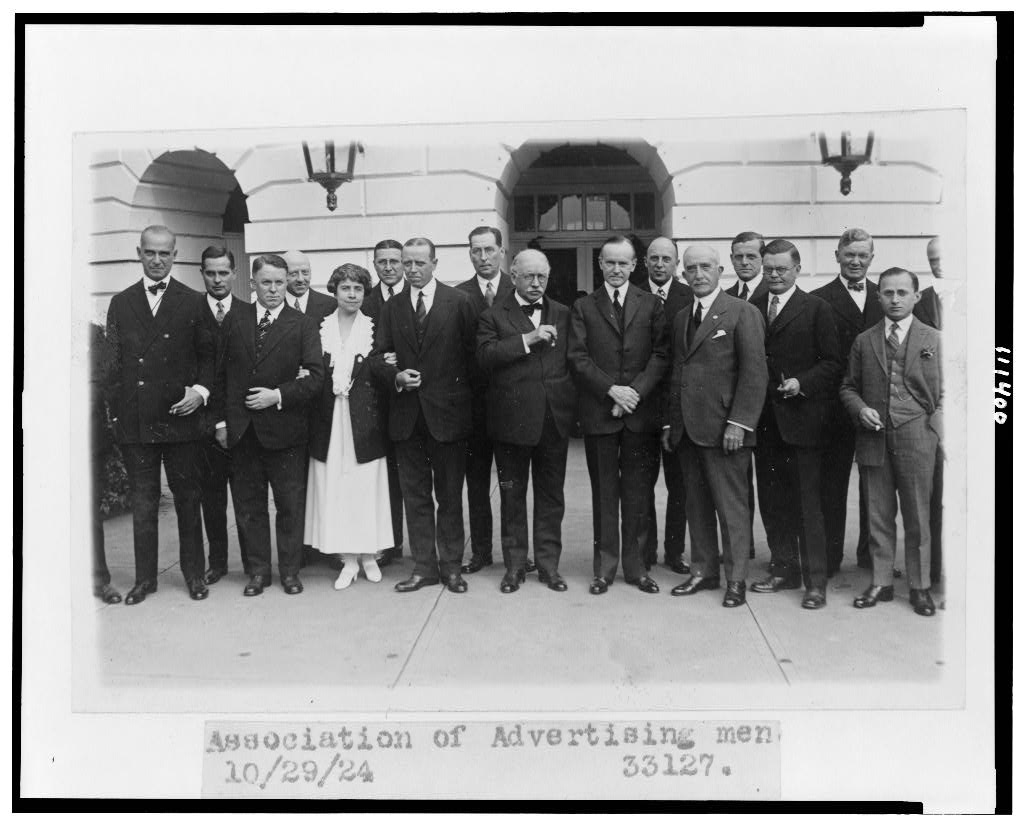 President Coolidge and the First Lady have their picture taken with members of the Advertising Association in 1924, two years before the speech cited below. Courtesy of the Library of Congress.

Addressing the American Association of Advertising Agencies meeting in Washington on October 27, 1926, President Coolidge took stock of the various components that made up life in the country. Society was rapidly modernizing, methods and culture were accelerating life at an incredible pace, and it was necessary not to lose sight of the values or the years of hard work that went behind each part of existence. Lest Americans take for granted the success of our free market system, the citizenship that makes Government work, or the cultural health of society, Coolidge recalls that none of these run themselves, none operate automatically, none go on indefinitely without a dedicated participation, continual maintenance, and strengthening of character. It was necessary then to look behind what made so much stellar success possible and perpetuate it far into the future. If the values informing and supporting this success did not remain grounded on firm, nurtured foundations the results visible in all our affluence, prosperity, and opportunity would dry up just as surely as the flowing mountain spring would were it cut off from its headwaters.

In more modern political terms, Coolidge was arguing that the social issues (grounded in the Judeo-Christian truth of the Ten Commandments and the Golden Rule) came first, not merely smart economic policy. Don’t discard the social issues, Coolidge asserts, thinking that we can reap the rewards with a system shorn of fundamental values and gutted of its moral meaning. The moral preceded and made possible the system that had advanced America in less than two centuries to heights not even millennia-old civilizations had reached. Those older empires had no less a grasp of shrewd trade or financial principles to dominate the world in their times. The Spanish Empire, Dutch Republic, and Great Britain had ruled commerce on a global scale in no too distance an age. America was different not because her people were genetically superior, intellectually better, or even morally purer. What made America different rested in her ideals. In fact, America had been entrusted with the same heritage of civilization which had been many generations in the building, to which many nations and peoples had contributed, sacrificed and toiled. It was in the moral convictions that life, liberty, and the pursuit of happiness are derived not from government authorities but from our Creator, and that governments are instituted among men not to despoil or possess the very life and property of subjects but to promote the general welfare of the whole people, not merely a part of it, that America had revolutionized and revitalized civilization. This was a dearly-learned truth and it was too precious to be jettisoned by a short-sighted, indifferent political expediency pawned off on a complacent citizenry.

Said another way, it is not enough to be for economic liberty while rationalizing away the deprivation of life to the most vulnerable. It is not enough to endorse tax reduction and balanced budgets without also decrying the immorality inflicted on the home and family by the divorce rate and redefinition of marriage, which both more profoundly impact prosperity than budgetary or monetary policy do. We cannot run from the cause, refusing to ever touch those dreaded “social issues” campaign after campaign, year after year, expecting job creation, expenditure reduction, and tax reform to furnish the exclusive focus for future political problem-solving. Our problems run far deeper than fine economic adjustments and while the array of social ills that we face is far smaller than in Coolidge’s day, he beckons us back to the importance of fundamentals. The spiritual must come first.

Coolidge expressed it this way, “Sometimes it seems as though our generation fails to give the proper estimate and importance to the values of life. Results appear to be secured so easily that we look upon them with indifference. We take too many things as a matter of course, when in fact they have been obtained for us only as the result of ages of effort and sacrifice. We look at our economic condition upon which we are absolutely dependent for the comforts and even the necessaries of life, and forgetting that it all rests on industry, thrift, and management, dismiss it lightly as a matter that does not concern us. Occasionally our attention is directed to our political institutions, which have been secured for us through the disinterested exertion of generations of patriotism, and, going along oblivious to the fact that they are the sole guarantees of our rights to life and liberty, we turn away with the comforting thought that we can let some party committee attend to getting out the vote and that probably the Government will run itself all right anyway. Then perhaps we are attracted by the buildings erected for education, or the temples dedicated to religious worship, and without stopping to realize that these are the main source of the culture of society and the moral and spiritual life of the people we pass them by as the concern very largely of schoolmasters and clergymen. We have become so accustomed to the character of our whole, vast, and intricate system of existence that we do not ordinarily realize its enormous importance.”

As he stated it in his Autobiography, “Unless men live right they die. Things are so ordered in this world that those who violate its law cannot escape the penalty. Nature is inexorable. If men do not follow the truth they cannot live” (p.53). Mr. Coolidge helps us remember that moral truth is the most practical reality we have. Without it, all else fails.