A challenge presented by one of my readers took a fair bit of investigation this week. The mystery has been solved, however, thanks to Coolidgean persistence. Just as the Coolidges remained steadfast friends of baseball throughout their lives, they supported it in both its professional and amateur leagues. From throwing out the first pitch in World Series games to watching negro leagues compete to signing balls for local charities, the Coolidges were there for it all. Here, the President is signing a ball for the Congressional team, represented by its captains, Republican M. Clyde Kelly of Pennsylvania and Democrat Thomas S. McMillan of South Carolina, May 1, 1926. Interestingly, the Democrats lead the series (played since 1909) 39-38-1, and even won that annual match over the Republicans, 12-9, at the old American League Park that once stood between Florida and Trinidad Avenues in Washington, D.C. For more reading on the Coolidge’s love for the bat and ball, read more here and here. 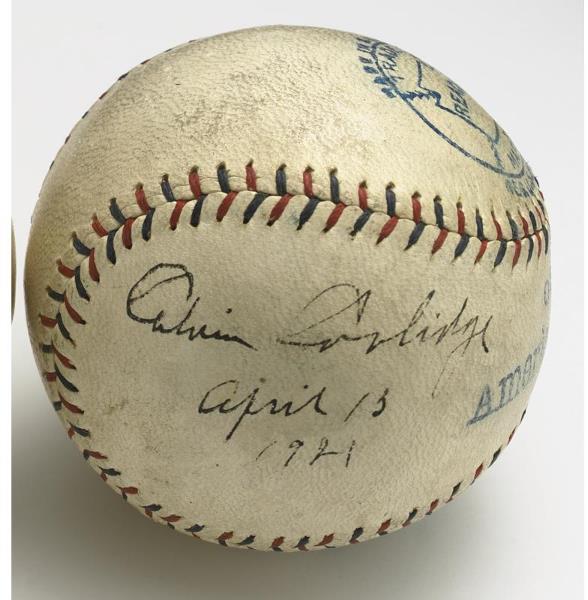 The signing in 1926 was by no means Coolidge’s first on a baseball, for at Griffith Stadium on April 13, 1921, Cal, then as Vice President, signed this memento from the game that day for the American League. Unfortunately, the Washington Senators lost their home opener against the Boston Red Sox (6-3) despite the attendance of three Presidents, past, current, and future: Wilson, Harding, and Coolidge. Of course, we know the Senators would go on to win the World Series in 1924 after Coolidge became President. Coincidence?