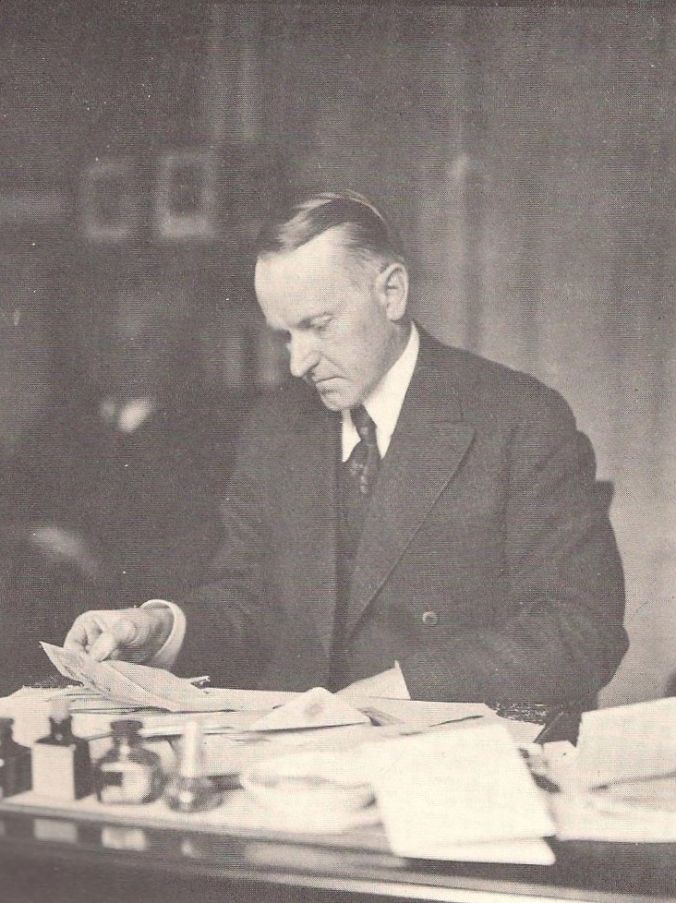 Coolidge spoke frequently of the nature of executive power. He held firmly to the original conception of that office as a limited and constitutionally restrained one. Consequently it demanded some of the greatest moral strength and personal fortitude ever demonstrated by any of our Presidents. It exacted a genuine courage and laser-like focus to hold such a course when it is so much easier to succumb to all the pressure of solving problems and advance an agenda by Presidential “initiative.” Coolidge demonstrated that the greatest action a President can take is often the act of restraint, to hold back when the desire is to rush in, and to prevent bad decisions be they his own or on the part of others.

The mistaken measure  of effectiveness is especially on display among those hailed as our greatest Presidents (men like Jackson, TR, Wilson, FDR, and even Lincoln to significant degree) who actually exhibited the lowest measures of Presidential discipline, the greatest number of mistakes, and an almost chronic lack of personal conscience for either the oath they took or the importance of preserving what it was they were entrusted to uphold. Their actions, they typically believed, were to be sanctioned by the ends despite what it cost the means, replacing the governance of law and the nation’s constitution (which is simply another term for its governing character) with nothing more than the motivations and will of whoever occupies the office at a given point. Emergency, it was usually claimed, demanded the temporary suspension of those constitutional confines in order to save them. It was no different for George W. Bush to claim unprecedented bailouts would save capitalism while taking the very steps that undermine it every time.

At the same time, Coolidge understood that the nature of Presidential decision-making cannot be realistically mapped out with complete preparation for what he should do in every circumstance he will have to face. The Founding generation did not know the future, but they did know human nature and the danger of entrusting unspecified power to it. All the same, an unquantifiable role is supplied by leadership in furnishing what is needed from the principles alternately empowering or constraining it. Each situation can only be confronted when the particulars arise. Even so, it does not grant permission to just any decision. What is right does not depend upon the personality in the White House (or his party affiliation) to make it right.

The Constitution furnishes the frame, the art of leadership furnishes the landscape of lawful and constitutional options within that frame. Situations do occur when what is normal is turned upside down and the leader must discover (as Cal would put) what is right in unguided or uncharted turf. Coolidge could see, however, that enough Presidents have perceived unprecedented ground when there was, in fact, plenty of familiar territory (in historical, constitutional, and legal recourses) from which to act. He refused to create new powers when what already existed ought to be applied, with greater diligence and faithfulness.  Even more importantly, he saw his greatest role as President to prevent wrong actions from becoming law in the first place, short-circuiting the devastation they almost always inflict on the people of the country. He knew we needed more observance of the law, less time on its creation and more respect for what is already there.

Coolidge had the vigilance and resolve to resist the temptation that a President had carte blanche to do as he chooses, free to reinvent the Office or superimpose his preferences against the consent of the governed. The President remained as much, if not more, obligated under the law as any other American. Accordingly, Coolidge strengthened the power of federalism and the separation of authority by expecting the Legislature to legislate (without trespassing on Executive independence), the Executive to administer what was legislated (without becoming the central generator of law), and the Courts to adjudicate from the facts and what existing law pertained to each case heard (without becoming factories of new laws as well). This upheld a respect for the clarity and majesty of the rule of law. It rested on so much more than individual personas.

When a truly unprecedented situation arose, Coolidge would not pigeon-hole himself in the belief that his oath mandated blind adherence to abstract maxims worked out in advance and cut off from their practical particulars. That was not serving faithfully, that was governing by ideologues. Unmoved by reality, ideologue government had brought the country to the edge of ruin under Woodrow Wilson. Cal, living in the real world, would not see public service (and consequently, people’s lives) fossilize before the sovereignty of theoreticians.

No empty vessel, ready to shift with any political breeze, but once in the Presidency, Coolidge took charge. He wielded the powers of the office not as one charmed by academic ideas but as one soberly putting his hand to the plow of straightforward duty to the Constitution, the law, and the proper balance of power in our institutions. As such, his executive style was decisive, acting when it was most appropriate to act.

For normal times, or more precisely, for times that would restore normalcy, Coolidge would affirm the specific powers entrusted to him are all a President needs for the good of the country. To Cal that was supremely important and often overlooked. Coolidge had the humility to understand the adequacy of our Constitution, the perspective to appreciate the daunting task all Presidents shared but also he had the sense to know that no emergency is so real and no crisis so bleak as to foreclose on those crucial and always-missed limitations on power.

“The Presidency is primarily an executive office. It is placed at the apex of our system of government. It is a place of last resort to which all questions are brought that others have not been able to answer. The ideal way for it to function is to assign to the various positions men of sufficient ability so that they can solve all the problems that arise under their jurisdiction…

“While it is wise for the President to get all the competent advice possible, final judgments are necessarily his own. No one can share with him the responsibility for them. No one can make his decisions for him. He stands at the center of things where no one else can stand…

“At the turn of his hand the guns of an enormous fleet would go into action anywhere in the world, carrying the iron might of death and destruction. His appointment confers the power to administer justice, inflict criminal penalties, declare acts of state legislatures and of the Congress void, and sit in judgment over the very life of the nation. Practically all the civil and military authorities of the government, except the Congress and the courts, hold their office at his discretion. He appoints, and he can remove. The billions of dollars of government revenue are collected and expended under his direction. The Congress makes the laws, but it is the President who causes them to be executed. A power so vast in its implications has never been conferred upon any ruling sovereign.

“Yet the President exercises his authority in accordance with the Constitution and the law. He is truly the agent of the people, performing such functions as they have entrusted to him. The Constitution specifically vests him with the executive power. Some Presidents have seemed to interpret that as an authorization to take any action which the Constitution, or perhaps the law, does not specifically prohibit. Others have considered that their powers extended only to such acts as were specifically authorized by the Constitution and the statutes. This has always seemed to me to be a hypothetical question, which it would be idle to attempt to determine in advance. It would appear to be the better practice to wait to decide each question on its merits as it arises. Jefferson is said to have entertained the opinion that there was no constitutional warrant for enlarging the territory of the United States, but when the actual facts confronted him he did riot hesitate to negotiate the Louisiana Purchase. For all ordinary occasions the specific powers assigned to the President will be found sufficient to provide for the welfare of the country. That is all he needs.

“All situations that arise are likely to be simplified, and many of them completely solved, by an application of the Constitution and the law. If what they require to be done, is done, there is no opportunity for criticism, and it would be seldom that anything better could be devised” (The Autobiography 198, 199-201)

One thought on “On Presidents”