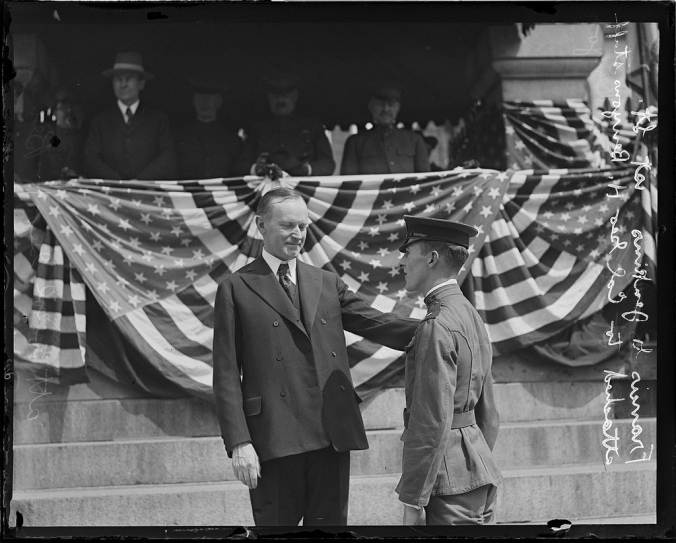 Governor Coolidge, standing at the State House in Boston with high school cadet Francis Jenkins,  who served at the time on the staff of Colonel Benyon, June 1920. Photo credit: Leslie Jones Collection.

We gain our progress in civilization not altogether from an assumed equality but to a great extent from variety. I said a moment ago that you had your profession, and others have their professions. Civilization and learning and science are so broad now that no one undertakes to comprehend them all, and it is an age of specialists, — it is an age of division of labor, and it is only as we work along lines of that kind that we are able to make any progress; and that has laid upon us a new burden that did not exist in generations that have gone before when each individual was self-sustaining and could take care of himself, and if he didn’t, it mattered very little to those who were about him.

It matters a great deal now, and that has put a new duty upon citizenship and one that must be realized and met and fulfilled, and we have not the privilege that we had then to refrain from carrying that occupation like your Society should day, ‘We will do not more work until something has been done in government or in economic relations that is to our satisfaction?’

You see what happens now when those who have cast their lot in transportation say, ‘We will refrain from doing the work that we are engaged to do.’ You can imagine what would happen if those who are engaged in agriculture would say, ‘There, we will stop our production until we have accomplished something by an exertion of a pressure of that kind, that we desire to accomplish either in a governmental way or in an economic way.’

That is not government — that is what they refer to as mass action. And unless we can carry our affairs orderly, peacefully, according to the laws of the land and under the Constitution, and each bearing the burden that the duty he has assumed puts on him to bear, we can’t sustain the kind of a civilization that we have chosen to make our own, it will break down and we shall find ourselves in a condition of anarchy on the one hand or of despotism on the other…